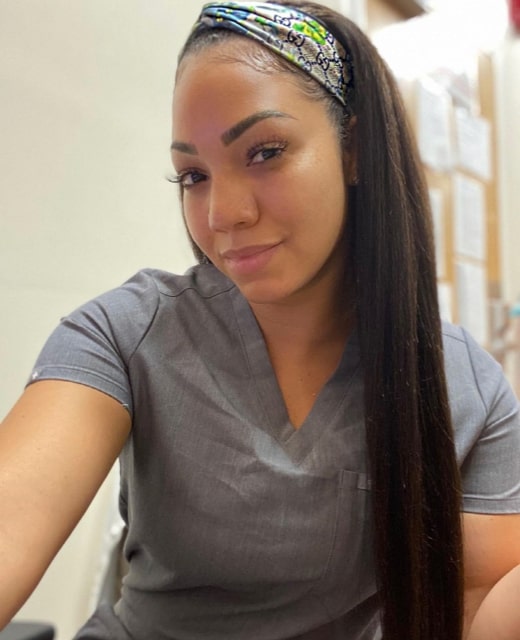 MY NEAR MISS WITH MELANOMA SKIN CANCER

My dad always loved my birthmark, pointing it out as one of my adorable uniquenesses, yet I never liked it. I was embarrassed by it, always trying to hide it.

But I also never imagined I’d be in danger because of it.

…Until we unexpectedly found out it was melanoma skin cancer.

The danger of melanoma skin cancer

Before I begin, let me share that melanoma is the deadliest type of skin cancer. It can easily go undetected for far too long, and because of its invasive nature, it can spread to other organs in the body.

Although it is a dangerous type of cancer, if melanoma is caught early on, the 5-year survival rate is 99%. Early detection is critical.

Growing up I had a large, flat, splotchy, brown birthmark on the top of my foot. I was self-conscious of the way it looked and dealt with it by trying to keep my foot concealed, always wearing full-coverage shoes. I desperately wanted to get it removed but it was considered a cosmetic (elective) procedure that would’ve cost almost $15,000. It was also going to entail skin grafts and a long recovery period because the birthmark covered such a large surface area on my foot.

Around the time when I was finishing medical school in 2007, I noticed my birthmark started to feel raised, forming a slight bump in one area. It seemed ‘different’, almost like a mole or growth. I decided to see a physician who did a shave biopsy on my foot —that’s where they shave off a layer of skin and send it off to a lab to test it.

The biopsy came back as melanocytic nevi, which are basically a collection of colored skin cells that form pigmented moles. They are moles that doctors like to keep a close eye on, even though they are typically benign (meaning non-cancerous).

Since a melanocytic nevus is considered a medical condition, insurance was willing to pay for the removal of the large birthmark turned mole on my foot.

Now mind you, the procedure was going to be intense. I still had to pay about $4000 out of pocket, be under anesthesia for three-plus hours, and I’d be off my feet for at least two weeks to heal.

After just graduating medical school, the added expense and time to recover from surgery felt like an undertaking. I debated going through with it, especially since my biopsy came back without much concern.

An inner feeling was gnawing at me to pull the trigger and remove the birthmark that I’d disliked and tried to hide for so many years. So I did.

After extensive surgery and removal of the whole birthmark, my physician sent it off to the lab for additional testing. I was shocked when the results came back worse than I’d imagined!

My birthmark, which formed a melanocytic nevus, had been officially diagnosed as melanoma in situ! This means I had a form of melanoma that was located in my top layer of skin, the epidermis.

Turns out 33% of melanocytic nevi turn into melanoma. I was part of that 33%. And, very lucky to have caught it before it spread deeper.

The Importance of Skin Checks and Recognizing Melanoma

When detected early, skin cancers are treatable and the survival rate is high.

The way to ensure awareness and early detection is by checking your skin monthly at home, looking for any signs of odd, discolored, or growing moles.

Moles may change over the years and new ones pop up. The more you examine your skin, the more easily you’ll recognize the early signs of changing moles.

When performing skin checks be sure to look in hard-to-see areas like the scalp or back.

Dermatologists recommend scheduling yearly skin checks at their office so they examine suspicious moles and identify any potential skin cancers. This is especially important because only 20-30% of melanomas form on existing moles. So, 70-80% of the time, melanoma grows on normal skin!

Physicians like to call odd moles, ugly duckling moles. They’re ones that stand out, are misshapen and uneven, raised or bumpy, or a different color like black, white, red, and even blue.

If you have any painful moles or sores that won’t heal or keep getting irritated, schedule an appointment with your doctor to have them checked out.

Download this pdf from the American Academy of Dermatology, if you’d like assistance in keeping track of your skin checks.

can people of color get skin cancer?

People with all skin types and skin tones can get skin cancer. And, even though people of color are less likely to get melanoma, when they do get it, the outcome is usually more severe because it often goes undetected until it’s finally diagnosed in a later stage.

To improve chances of detection, people of color should look for changes on their skin monthly, performing at-home skin checks.

Tips for self skin checks

Be sure to examine the hard-to-see areas like the scalp and parts of the body with lighter skin, like:

How to prevent melanoma (and non-melanoma skin cancer)

Prevention starts with you. Aside from your monthly skin checks and yearly dermatologist skin checks, you can dramatically prevent melanoma and non-melanoma skin cancer by doing just a few things.

I never expected melanoma to happen to me, especially since it evolved from what I thought was just a birthmark. Be your own advocate and listen to your gut. If something doesn’t seem right, don’t wait. Early detection is your best chance for a high cure rate and survival.

Sign up for my newsletter and never miss a beat on the latest health, fitness, and lifestyle topics.

This website uses cookies to improve your experience while you navigate through the website. Out of these, the cookies that are categorized as necessary are stored on your browser as they are essential for the working of basic functionalities of the website. We also use third-party cookies that help us analyze and understand how you use this website. These cookies will be stored in your browser only with your consent. You also have the option to opt-out of these cookies. But opting out of some of these cookies may affect your browsing experience.
Necessary Always Enabled
Necessary cookies are absolutely essential for the website to function properly. These cookies ensure basic functionalities and security features of the website, anonymously.
Functional
Functional cookies help to perform certain functionalities like sharing the content of the website on social media platforms, collect feedbacks, and other third-party features.
Performance
Performance cookies are used to understand and analyze the key performance indexes of the website which helps in delivering a better user experience for the visitors.
Analytics
Analytical cookies are used to understand how visitors interact with the website. These cookies help provide information on metrics the number of visitors, bounce rate, traffic source, etc.
Advertisement
Advertisement cookies are used to provide visitors with relevant ads and marketing campaigns. These cookies track visitors across websites and collect information to provide customized ads.
Others
Other uncategorized cookies are those that are being analyzed and have not been classified into a category as yet.
SAVE & ACCEPT

By submitting your information, you’ll be included on the Waitlist and get the latest update about the Transformation Coaching “Reach your Dream of Becoming a Doctor. You also agree to our Terms of Use and Privacy Policy.

By submitting your information, you’ll be included on the Waitlist and get the latest update about the Transformation Coaching “Become An Influential Doctor”. You also agree to our Terms of Use and Privacy Policy.